skip to main | skip to sidebar

You'll have to sit in the front seat, the back's been quarantined.

Well, that just about does it for any future rides I planned on Greyhound...

A passenger traveling on a bus across Canada's vast Western plains stabbed, gutted and decapitated a man seated next to him in an unexplained attack, a witness told media Thursday.

The victim had been sleeping before he was repeatedly stabbed in the chest by a man with a large knife, witness Garnet Caton told public broadcaster CBC.

The other 35 passengers and driver were jolted by "blood-curdling screams" and fled. "He must have stabbed him 50 times or 60 times," said Caton.

When Caton and two others returned to check on the victim, he said they saw the attacker "cutting the guy's head off and gutting him."

"While we were watching ... he calmly walked up to the front (of the bus) with the head in his hand and the knife and just calmly stared at us and dropped the head right in front of us."

Labels: Don't Lose Your Head, News of the Whoa

So I caught a foul ball on Saturday. I've told everyone under the Sun at this point, and I even blogged about it for the ol' Mets blog.

But when NJ.com features a splash with a picture of my foul ball on its home page*... 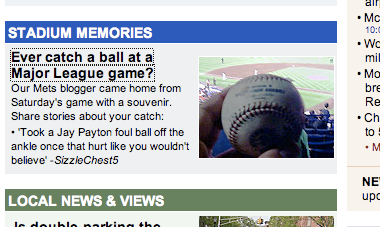 *It's gone, but not forgotten.
Posted by MatthewA at 12:40 PM No comments:

End of the Day

The hour hand has spun. And before the night is done, I just have to hear those sweet words spoken like a melody.
Posted by MatthewA at 11:06 PM No comments:

Do you suppose that I would come running?

You know I would... I'd come running if you call my name out loud.
Posted by MatthewA at 11:12 PM No comments:

The hilarity of that laugh will haunt my dreams forever.

In the meantime, here's a video you'll probably watch several times to keep you busy:

Posted by MatthewA at 9:05 AM No comments:

So you're saying there's a chance?

It recently came to my attention that a Ms. Nikki Hilton, heiress of the Hilton family fortune and sister of, well, you know, attended high school at the Convent of the Sacred Heart. According to Wikipedia, Nikki graduated from the uber-fancy, rich girl Upper East Side K-12 prep school in 2001. It's tiny, like a graduating class of 50, and everybody knows everybody.

We post this not to aimlessly build up our web counter, but because she graduated in 2001 - 2 years after I departed my alma mater, Regis High School. Regis being a mere six blocks away from Sacred Heart.

We also point this out because my junior year (which would correspond with Nikki's freshman year), I made my HS theatrical debut at Sacred Heart playing Tommy French.

With a tiny school like Sacred Heart, everybody shows up to events - especially plays and musicals, where the large female cast often received ovations from their collective circles of friends. So, one would presume Nikki befriended someone in her time at Sacred Heart.

Which means she might very well have seen me perform.

And I take a strange sense of satisfaction from that. I do not know why.
Posted by MatthewA at 2:39 PM 1 comment:

Hello everyone. Thought I'd check in - been busy with Always Amazin' and the holidays and such.

We spent Christmas and New Year's Eve up in scenic Colchester, VT. It was snowy. And awesome. I own a bright red sweater now. And Erin makes great cookies. Try one. You'll agree.

Anyway, we check in to commemorate a moment that occurred on the way home... in a snowy part of Vermont just south of Benson, VT.

We'll let the moment speak for itself with this little video:


Yep, we did it. Our little '95 Toyota Camry officially hit the 100K marker. (FYI: Van Halen's "Right Now" = purely coincidental. It was on Sirius, and I couldn't change the channel for fear of losing control of the car, what with the camera and the snow and all.)

Happy New Year's, all.
Posted by MatthewA at 5:47 PM No comments:

Hooked on Phonics Worked For:

MatthewA
Bronxville, NY, United States
I sleep in a drawer.